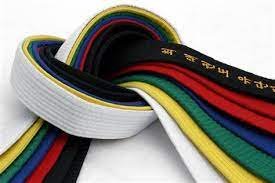 Have you been thinking about enrolling your child in martial arts? Or, most likely, have they been begging you to start martial arts classes? Well, you might want to give into that idea because there are numerous benefits of practicing martial arts.

This article will give you all of the basic information you need to to give taekwondo classes a try. Also, it has all of the information about how Taekwondo belts work.

Taekwondo (also known as Tae Kwon Do) is a type of Korean self defense art. When directly translated, the name means: Tae (foot), Kwon (hand), Do (art). However, “Tae Kwon” can be interpreted as “to put fists under control” or “to step on fists”, which makes it all come down to a concept of using all parts of the body correctly to stop violence and help build a more peaceful world. This is an interesting point as many people believe martial arts to be violent when, in reality, they teach people to use their body and skills with responsibility.

The goal of Taekwondo is to give people a sense of self-esteem, self-defense, and enhance mental and physical health. That is because when all of these elements are put together, there is harmony.

The Roots of Taekwondo

Taekwondo is one of the oldest martial arts in the world. One of the earliest clues of its existence traces back to the years between 37 BC and 66 AD in a mural that was painted on the wall of a tomb in Korea. And, since then, there have been records of the advancement of Taekwondo in the country. Centuries later, it would take on the rest of the world.

Taekwondo is one of the most methodical Korean traditional martial arts. It goes beyond teaching physical fighting skills. It is a discipline that teaches ways of how to enhance the spirit and life while training the body and the mind.

Some of the benefits of Taekwondo are:

Taekwondo’s Belt System has been an important part of its tradition since the 1940s. Students are honored with belts as they develop and go up the rank for being disciplined, skilled, and dedicated to the sport.

Belt colors indicate the students’ rank, and the belt system works as an incentive for them to advance to the next level of training.

How to Go Up the Taekowndo’s Belt System

Many different martial arts have bel systems, such as Taekwondo, Karate, Jiu Jitsu, and other forms of self-defense arts. But just as they are all different sports, they also have completely different belt ranks.

The requirements to go up the belt rank may vary from school to school but, in general, when the instructor believes the student to be ready to move on to the next belt, the student will be invited to test.

How To Earn a Black Belt?

One thing most martial arts have in common is that the black belt is the highest rank of all belts. The time it takes to earn a Taekwondo black belt depends on different sets of factors such as age, dedication, years of training, and skills. Another important thing is that the student’s abilities should match the standards of the martial arts school that will be issuing the black belt.

The range of belt colors can be confusing for someone who is new to the sport: there are many different colors, and some have a single color while others have more than one color. Besides, the color system varies between schools.

You will be able to better understand how they work below:

The first thing you need to know is that each belt color correlates with the GUP of the student, which means the degree. There are 10 GUP degrees and they work in a decent way, so the white belt (the initial one) is the 10th GUP while the belt that comes right before the black belt (the last one) is the 1st GUP. The reason why the black belt isn’t the 1st GUP is because, in this case, it is called DAN. For black belts the word DAN replaces the word GUP as a rank indicator, but the system works the same way for them: there are 10 DAN degrees that are, usually, indicated by embroidered gold stripes on the belt.

Now that the trickiest part has been cleared out, let’s dive into the most common belt color systems:

This is the initial belt color, so that is the one your kids would wear in their first class.

The test to move on to the white with yellow stripes rank requires the student to perform a predetermined pattern, and go through the three-step and one-step  process with another student.

They also need to be able to defend themselves and break free from certain moves, kicks or blows.

The test to move on to a yellow belt is pretty similar to the last one, but with a different pattern, and the student also has to be able to break boards with both hands and feet.

While all the promotion tests may seem similar, the test to move on to the yellow belt with green stripes requires the student to go through a different pattern from the previous ones. In addition, they will be requested to break a two-inch board with the hand and one-inch board with the feet and to perform a one-step sparring.

In order to move onto a solid green belt, the student has to perform another pattern, and both a one-step and a freestyle spar. They also will be required to break through a board again, only, this time, it will be a two-inch board and with both hands and feet, as well as demonstrating the ability to defend themselves.

To earn the green with blue stripes belt, the student must perform another pattern, and defend themselves against certain moves. The student will also have to break a thicker board using their hands and a jump kick. They now will also have to undertake the one-step and free sparring.

The test to earn the blue belt is similar to the last one, with the main differences being  the induction of a different pattern, the addition of two-step sparring, and having to use a turning kick in order to break a one-inch board and a punch to break a two-inch board.

Achieving the blue with red stripes belt requires expertise and a lot of skills. As the tests get longer and more demanding, the student will now need to defend themselves against knives and unarmed opponents. They will also have to break two-inch boards with a punch and a turning kick, like the last test.

Once again, the pattern to be performed will be different, usually requiring two-step sparring with multiple free sparring. They will also have to break a three-inch board with a kick.

The test is the same as the last one, except with a whole new different pattern and the need to break two even thicker boards.

This is the highest rank in Taekwondo. In order to pass the test for a black belt, students will be required to perform high level patterns, sparring and defenses against opponents and objects. And last, but not least, they will be required to break boards with a kick or blow. To get to this stage, students need years of practice, discipline and dedication to the art of Taekwondo, and even more so in order to rank up those DANS.

Business Definitions to Get You Started

Everything You Need to Know to Host Socially Distant Events